By Nick Jonckeere, with courtesy of The Automobile Magazine

By instigation of Baron Pierre de Crawhez, the Circuit des Ardennes was the first race to be held on a closed circuit. Town-to-town racing had already proven to be dangerous, and disadvantages like level crossings and urban neutralisations made timekeeping difficult. Racing on a circuit also gave the advantage of easier spectating, and therefore, from its inception in 1902, the Circuit des Ardennes was an instant hit. Being organised until 1907, it attracted the finest European racing cars and drivers and competed with events like the Gordon-Bennett, French Grand Prix and Kaiserpreis races. Nick Jonckheere digs into the history of the event that put Belgium on the international racing map.

Baron Pierre de Crawhez was an important Belgian motoring pioneer and winner of the first real Belgian car race in 1898, Brussels-Château d’Ardennes-Spa, on a Panhard & Levassor called ‘Dévastation’. He was also the president of the sports committee of the Automobile Club de Belgique and chose the circuit to be in the Belgian Ardennes, because of its challenging hills, beautiful landscapes, straight roads through forests and low population.

On the 31st of July, as early as 5 am, Baron Pierre de Crawhez was first away to complete the 318 miles. Jarrott wrote afterward: ‘The rest of the cars were started without any attempt at classification, some being tourist cars carrying four persons, racing voiturettes carrying one only, then two or three racers, and then a light car’. 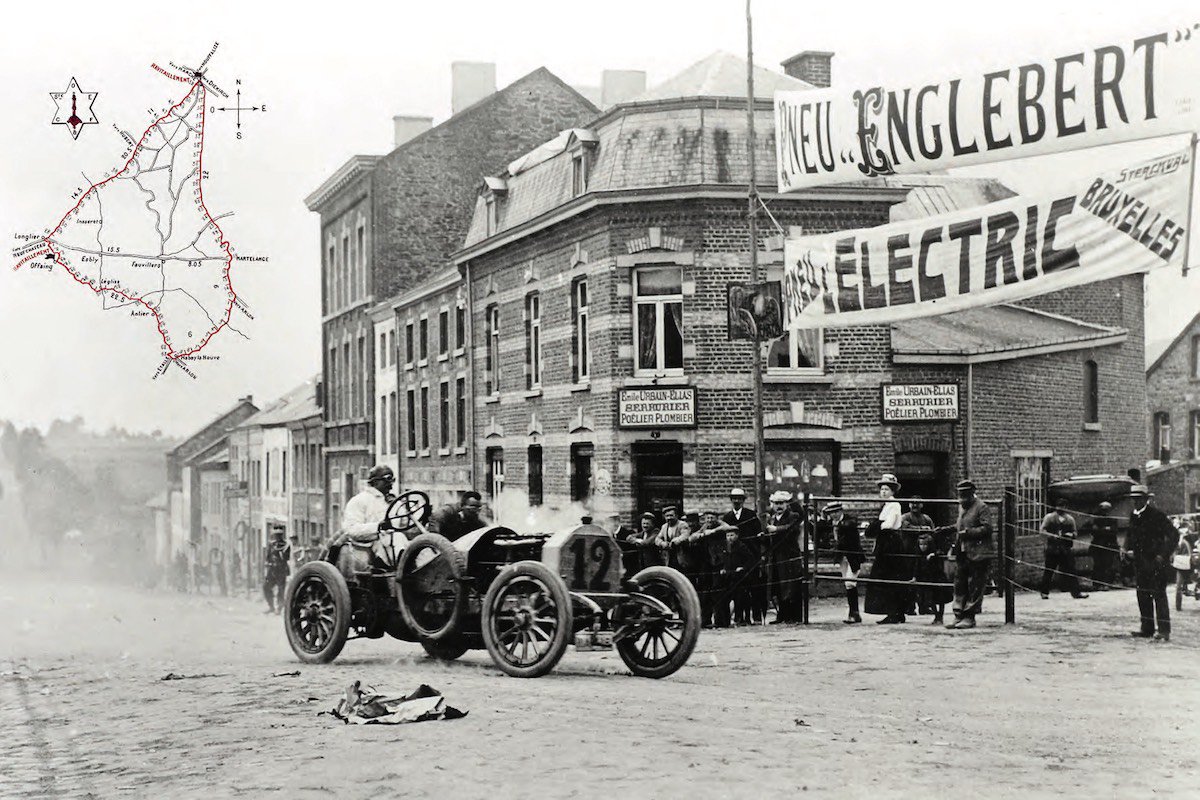 1907, de Caters in his 120 hp Mercedes, winning the Grand Prix class, for which only 6 cards had entered. 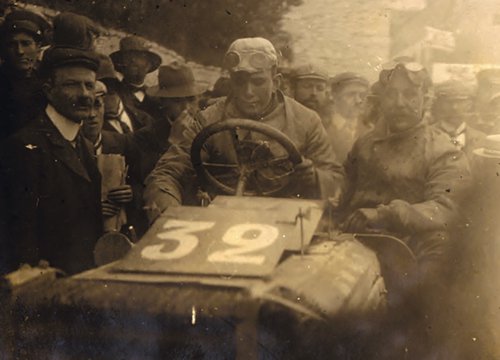 Jarrott won the 1902 race. McCormack, his 'mechanician', was the manager of the Panhard & Levassor works in London. He had never been in a race and was anxious for the experience, 'which cured him once and for all'. 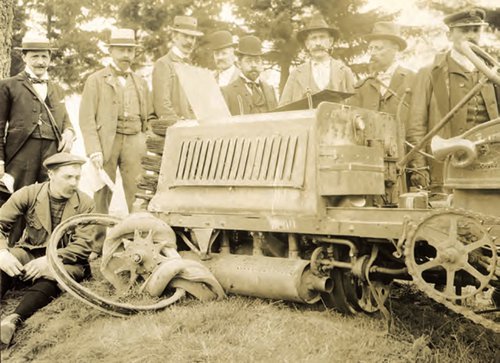 In 1902, organizer and favorite Baron Pierre de Crawhez drove the 70 hp Panhard & Levassor, that had participated Paris-Vienna in the hands of de Knyff. He collided with Coppée's Germain and crashed in the third lap. Still, Coppée eventually arrived 9th.

The big favourite, organizer Baron Pierre de Crawhez, who had chosen the course and therefore knew it thorougly, had made a perfect start and finished his first lap before the last three cars had started. A journalist reported: ‘He flies by like a hurricane, in a formidable clamour of stupefaction...’. Little later, he had won the Raczynski cup for the best time over the first 100 kilometers, which he did in 1h 2min 25sec (59.8 mph). Quite a bit of excitement followed, as already after the first lap one of Jenatzy’s wheels collapsed, resulting in a spectacular accident, but both driver and mechanic escaped with minor injuries. de Caters, to avoid imprudent spectators, smashed into a wall. Théry, in a Decauville, hit a cow.

It is worth mentioning that Jarrott never had been round the course before, and only knew his way ‘by following the wheel tracks of his predecessors round the corners’.

In the third lap, Pierre de Crawhez hit Coppée’s slower Germain car, which cut out the spokes of his front wheel. A ‘terrific crash’, but Pierre and his mechanic miraculously escaped.

In 1903, with the fatal Paris-Madrid of only a month before fresh in mind, securing the circuit was a major concern for Pierre de Crawhez. Roads were now closed to the public and marshalling flags introduced. Blue for slowing down, blue-red for obstacles and yellow to stop. During their masses, the local priests effectively urged the parishers to be careful! 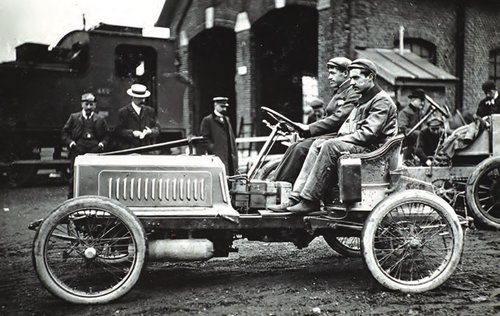 Journu and the De Dion Bouton which became sixth in the light car class in 1903. The car survives and has participated the commemoration events in the Ardennes.

The slow tourist class was abandoned, and racing spread over two days. Heavy and light cars raced their 318 miles on the 22nd of June, voiturettes and motorcycles on a shorter track, one day later.

After some hillclimb and flying kilometer warming-up in the morning, racing started from 3.15 pm. Pierre de Crawhez was again first away and in great shape. He would never leave his leading position, and naturally won the Raczynski cup again (57 mph). Vanderbilt, still in second position after one lap burst the cylinder head of his Mors and gave up. Duray and Rigolly, both on 100 hp Gobron-Brillié four-cylinder/eight-piston engined monsters were in 4th and 9th position after lap one, but both disappointingly retired with tyre trouble after the second lap. Similar bad luck for last year’s winner Jarrott, who competed with the De Dietrich he had driven in the Paris-Madrid. ‘The tyres would not stand the terrific heat they were subjected to in driving at a high speed. My plight was similar to that of all the other competitors in the race with the same make of tyres.’

There was not much battle for the medals: de Crawhez won with an average of 54,3 mph, Girardot (40 hp C.G.V.) took second, De Brou (45 hp De Dietrich) third position. Belgian cars took honourable positions: Coppée was 6th with his Germain, but Pipe took 8th (Guders), 9th (Hautvast) and 11th (Van de Poele), on a total of only 11 finishers out of 25 starters.

In 1904, voiturettes and motorcycles raced their 149 miles the day before the main event, again on a different track than the cars. Voiturette victory went to Clément on a Clément-Bayard (33,5 mph).

The novelty for this edition was the ‘goudrogénitage’, the tarring of the road, a costly but effective way to reduce the dust, performed by Mottay and Pisart of Brussels. They had started work on 21st of July by sweeping up dust and mud and during the following days spread the tarring compound over the full circuit. 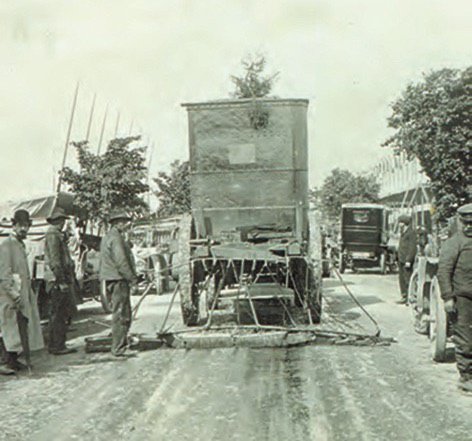 'Goudrogénitage' by Mottay et Pisart of Brussels, tarring of the roads to settle the dust was first used in 1904. For several years, the white substance was spread over the full circuit. In 1905 it cost 40,000 francs to apply the 800 tons. 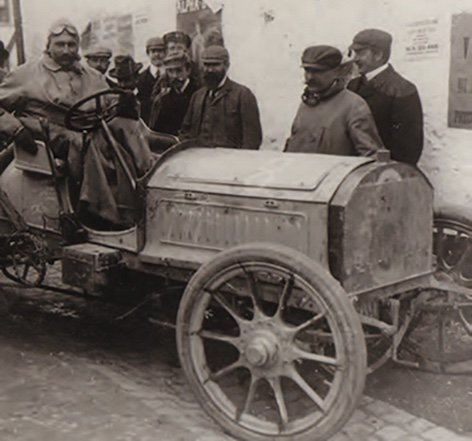 Coppée and the Germain with which Pierre de Crawhez collided in 1902.

A very international entry in the heavy class included Fletcher and Terry on Mercedes, Bianchi and Girling on Wolseley, Mayhew on Napier and Lancia on Fiat. Only two Belgian cars entered, Hautvast and Jenatzy, both on Pipe. The usual French car marques were present, and Hotchkiss returned. Several cars had performed well during the speed trials in Ostend the week before. Rigolly had set a new Land Speed Record of 103,6 mph there, the first to go over 100 mph, with the Gobron-Brillié monster.

In the main event, on the 25th of July, Duray, on a 100 hp Darracq, took the lead after one lap, Henri Farman (90 hp Panhard & Levassor) took over in the second. Then Heath shot forward and secured his first position only to have it taken by Teste, also on a 90 hp Panhard & Levassor, during the fourth lap. But Teste got into serious tyre trouble and did the last lap on bare rear rims, thereby loosing so much time that he lost the battle to Heath with only a minute. Heath averaged 56,8 mph. Clément was third, Rigolly on his faithful Gobron-Brillié fourth. Belgians Jenatzy and Hautvast, both on Pipes, had abandoned because of a petrol leak and a short-circuit. Light car class winner was De la Touloubre on a 40 hp Darracq, averaging 47 mph.

But many withdrawals eventually limited the entry field to a rather limited 13 heavy cars.

Many others didn’t have a very good race either. Early on, Gabriel overturned his car after a corner misjudgement and ditched his De Dietrich, fortunately unhurt. Jenatzy tried to reach the pits with a flat tyre, but once there, the rim was too much damaged to install a new tyre. Fabry had to give up because of a blocked engine, Rougier with a broken clutch.

Hémery, having the benefit of a good power to weight ratio (80 hp/750 kg), had gone from third to first position halfway in the race. There was no real opposition and he won with five minutes spare to Tart with an average of 61,6 mph. Le Blon was third, Wagner fourth, Heath fifth, de Caters sixt, Duray seventh. All the others didn’t finish. 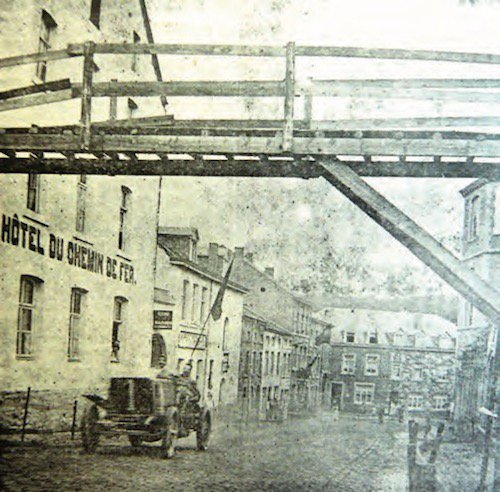 'Heath passing through St-Hubert on his way to winning the 1904 event with less than one minute difference to Teste. Both were on 90 hp Panhard & Levassor's. 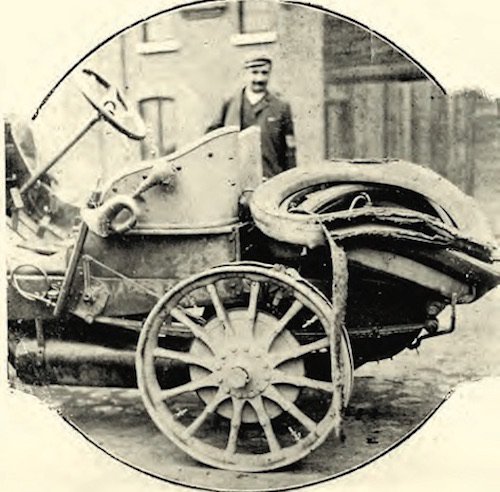 Before the 'roue amovible' was introduced in 1906, unavoidable (or precautious) tyre changes were very time consuming, taking as much as 15 minutes of hard work with tyre levers and pump.

As by 1906 the Gordon-Bennett had been ‘deposed by common consent of the nations’ and ‘allowed to lapse into oblivion’, the French took the opportunity to organise their own competition that year, the Grand Prix de l’Automobile Club de France. The first edition had been raced in June in Le Mans and had already taken the biggest efforts of the manufacturers. Therefore, for the Circuit des Ardennes, the heavy car class had only two countries represented: Germany and France, but Panhard & Levassor and Renault did not enter. The Belgian marques had put their forces on trials in Scheveningen, Ostend, Dinant and Spa. 28 cars had entered, but only 19 started, as also Hotchkiss and Grégoire withdrew their entries.

Although Wagner on his Darracq had reset the record for the first 100 km (67.42 mph), it was Duray who took the lead from lap two and never left that position with his 130 hp De Dietrich. Hanriot came second on a Darracq, but this year the De Dietrichs dominated the race, as they also took third (Rougier), fifth (Gabriel), and seventh position (Sorel), as such winning the regularity cup (three cars within the first five finishers). Duray’s average speed was 66 mph. Only one light car was engaged, Demogeot on a 40 hp Darracq, but had to give up after lap two. 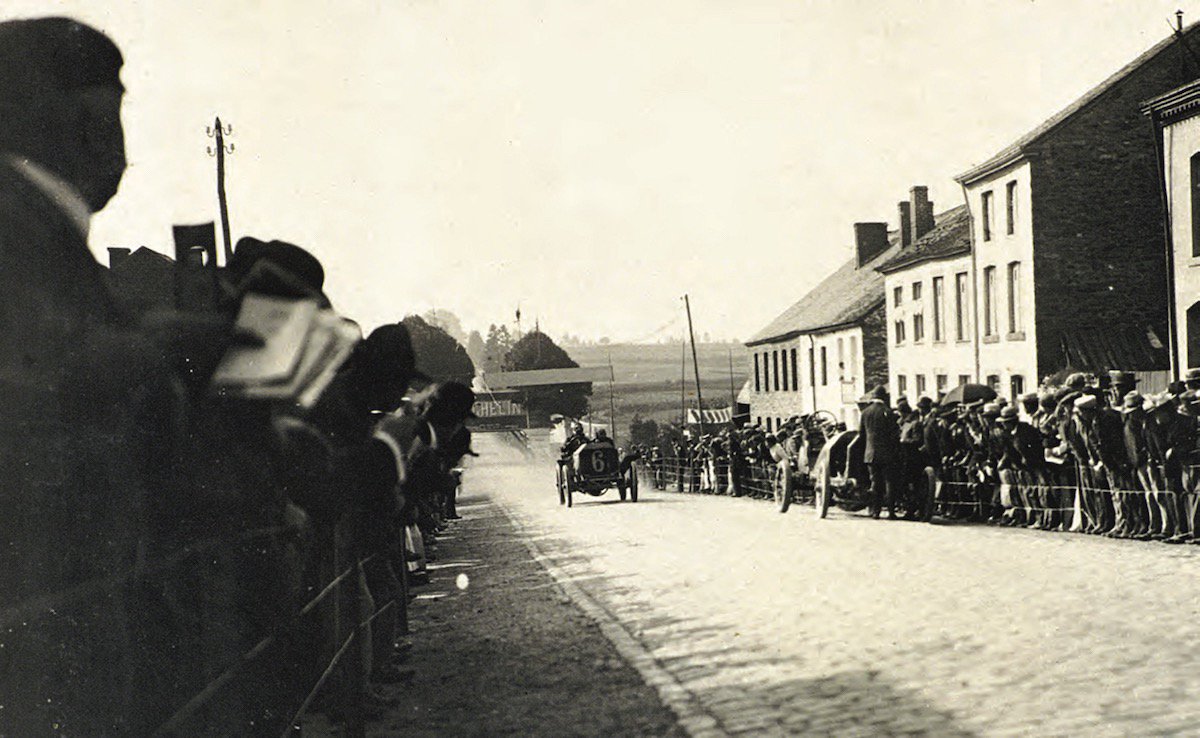 Entering Bastogne in 1905, Heath (6) passes Fabry's Itala that broke down after one lap.

In 1907, there were some changes. On the first racing day there was a competition for Kaiserpreis cars. The Kaiserpreis originally was a prize offered by the German Kaiser Wilhelm II, as he also, just like the French, wanted his own German event. It was intended for cars with engine capacities lower than 8 litres and so many entries (92) were received that two eliminating races had to be held. It was raced in June and won by Nazarro on a FIAT. The popularity of this event made the Circuit des Ardennes organisation choose to run a Kaiserpreis class, for which 23 cars entered. For the Grand Prix class though, there were only 6 entries.

On the 25th of July, from early on, the Kaiserpreis class became a Belgian marque battle between Minerva and Pipe cars, but Hautvast (who had come second in Germany) and Jenatzy, both on Pipe, abandoned in the 3rd lap. Moore-Brabazon, Algernon Lee Guinness and Koolhoven on the Minervas made a perfect show and within 79 seconds of each other, took first, second and third position, with an average of 59,5 mph for the winner. 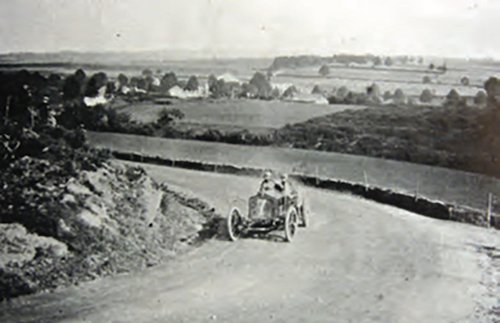 Duray on his 130 hp De Dietrich goes round the bend in Longlier on his way to a win in the 1906 Circuit des Ardennes. 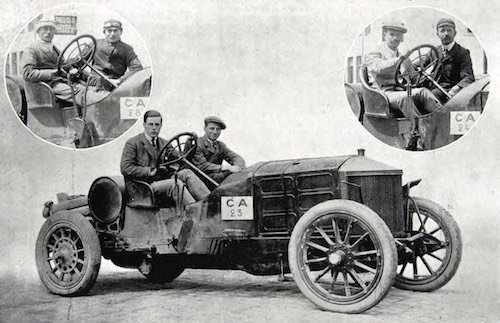 A total victory for Minerva in 1907, Moore-Brabazon (main), Koolhoven and Algernon Lee Guinness (left medallion) taking first, second and third. In the right medallion is Warwick Wright, who became sixth.

De Crawhez had foreseen a new format for the 1908 edition, an international regularity criterium, crossing 5 countries, followed by the usual Circuit des Ardennes. But there was a lot of pressure to move the event to Spa, and finally a clash of dates with the Coppa Florio had the event cancelled for 1908. It meant the end of the Circuit des Ardennes. But the racing world had changed in the meantime.

Town-to-town races had stopped, after the Paris-Madrid disaster and circuit racing was now the standard: Targa Florio, Coppa Florio and of course the French Grand Prix. Thanks to Baron Pierre de Crawhez, the Circuit des Ardennes had put Belgium on the racing map, which eventually lead to the Francorchamps circuit, today still a F1 favourite. 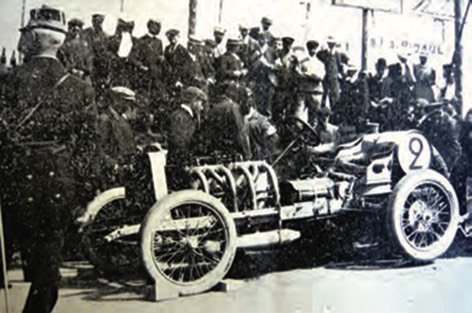 Winner of 1905, Hémery during a tyre change in Bastogne. 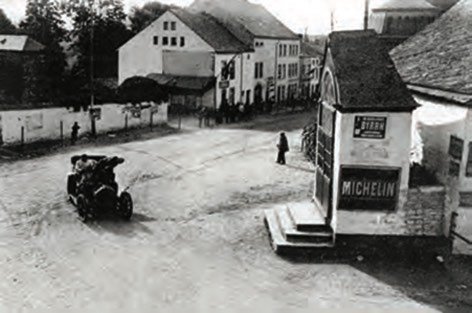 Wilhelm won the Coupe de Liedekerke in 1906 with this Métallurgique, seen here taking the turn in Bastogne. 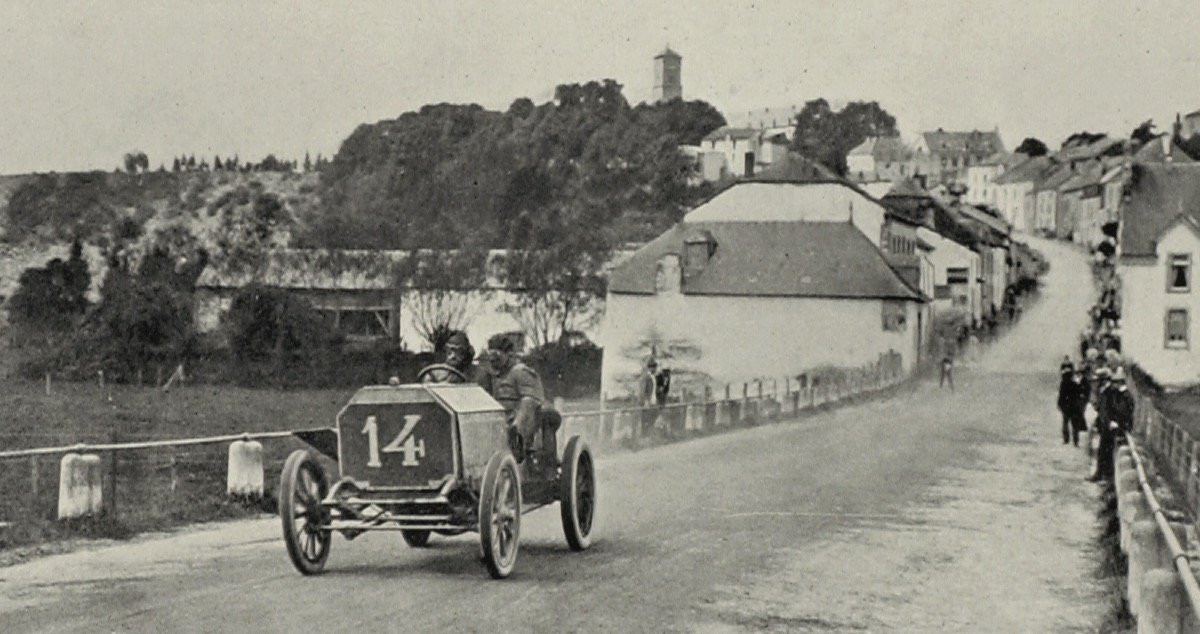